The raw material for the basic colours is river clay. This clay is mined in the basin of the Rhine (also in Germany), the Waal, IJssel and Meuse. It involves floodplains clay in the baked colours grey-red, bright red and natural bronze and yellow..

For the production of the other colours, Eifel and Westerwald clay is used instead of river clay. Annually, approximately 100,000 m³ of clay is required to achieve the production quantities of Huissenswaard (approx 75 million WF (Waal format) per year).

Other raw materials include sand, lava, marl (lime) and iron and chromium oxides. The last three are added to affect the naturally defined colour of the clay. Incidentally, the use of additives is limited to an absolute minimum. In various grades, sanding creates additional colour shading. Furthermore, sand gives the bricks a characteristic surface texture. Huissenswaard also produces hand-moulded bricks without sanded surface: called Structeau®. 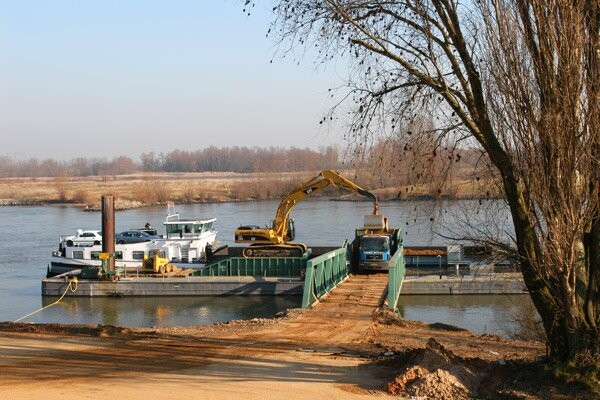 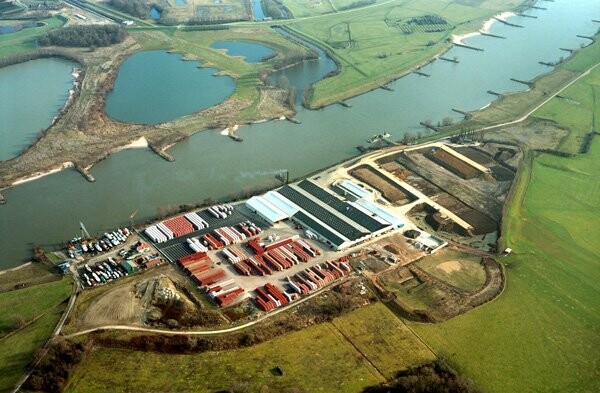 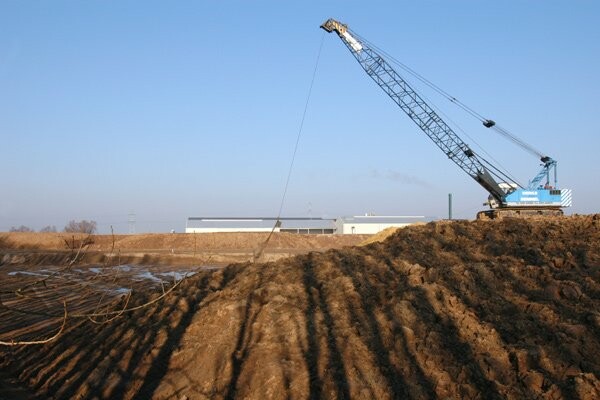 The clay depot of Huissenswaard provides storage for up to 130,000 m³ of clay.

The clay is composed of clays from various extraction sites. The sand and clay particles at the extraction sites are analysed in advance on the ratio of iron and lime (important for the colour of the brick), on the proportion of organic substances and on trace elements (salts causing efflorescence) present. A plan is then drawn up for the new clay mound on the basis of the analyses.

The clay is applied in the depot in layers of about 50 cm, such that the clay package (seen vertically) has just about the same desired composition everywhere. By analysing all of the individual layers of the clay depot, deviations can be rectified by applying slightly thicker or thinner layers. The carefully constructed clay mound should always produce the same end product. In this regard, Huissenswaard has a very good name!

Before it is brought to the factory to be used for the production of bricks, the clay is first mixed thoroughly at the depot.

The Eifel and Westerwald clay is supplied ready-made and stored in the depot, or in the clay shed. These high quality clay types are mixed to the desired composition by the supplier. 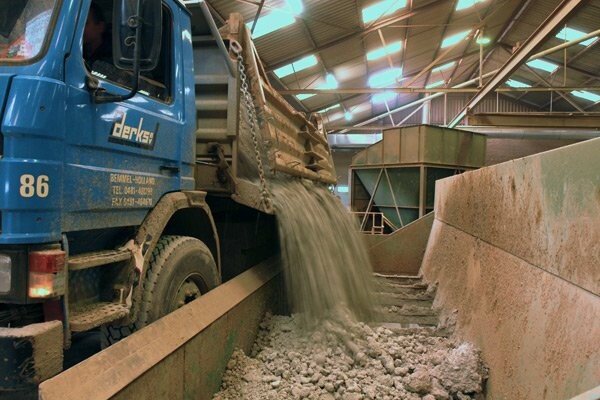 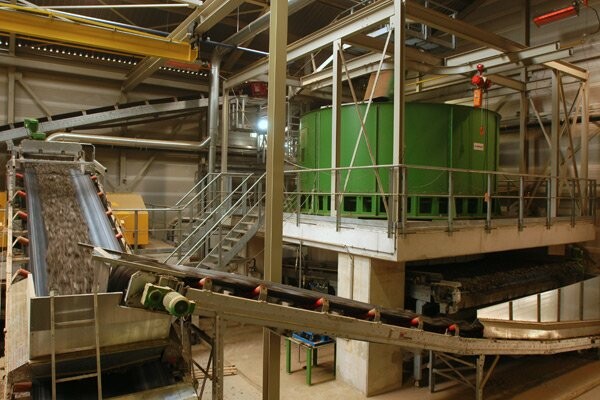 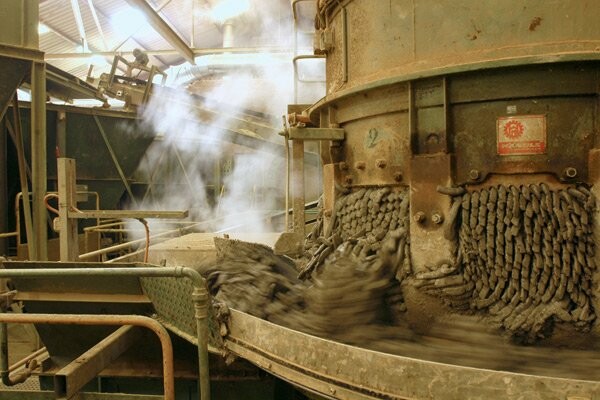 The clay is dug out of the depot using a dragline and transported to the factory by truck, or collected from the clay shed using a wheel loader. In the factory, it is poured out into so-called Box feeders: one load every ten minutes!

These Box feeders dispense controlled amounts of clay onto the production lines to the ‘Koller mill’. The clay passes through powerful electromagnets that remove the rail spikes, etc, as well as grenades from the second World War. During the transport, sand, lava, lime, iron and/or chromium oxide is added, if necessary, to improve the quality and colour of the end product.

In the Koller mill, the clay is spread out and crushed. After this operation the clay passes through a Rolling mill, where it is reduced even more, to the clay shredder. This is where thorough premixing occurs. The clay is further kneaded in the mixers while adding water and steam into a plastic mass, which is then shaped into bricks in the brick press. This all happens automatically, computer-controlled. 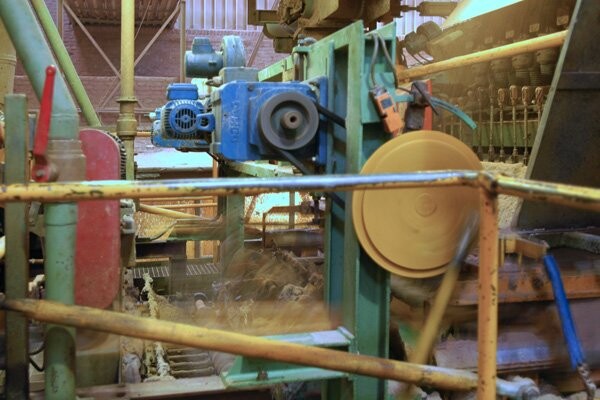 The ‘De Boer' (17 tray) moulding belt press carries the linked moulding trays under the moulding tub, where the moulds are filled with clay. This can be done in two ways:

The press has a capacity of 30.000 bricks WF per hour. (For an average home in the Netherlands, approximately 6,000 bricks are necessary, i.e.: 5 homes per hour!)

The moulded ‘wet’ bricks are unloaded onto dry plates, which are collected in a rack, from which the transfer carriage picks them up and takes them to the drying area. For nine hours a day, 270,000 bricks are produced. 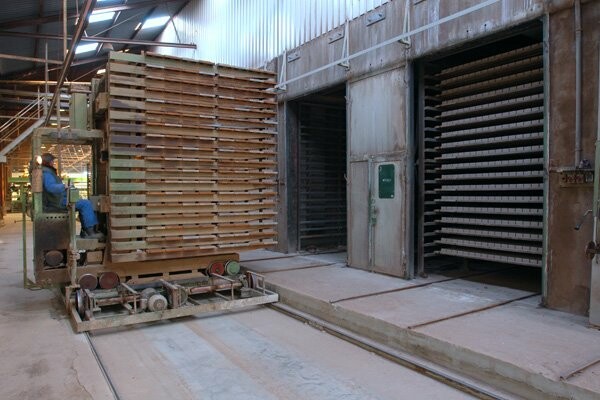 In the drying area the ‘wet bricks’ are dried by moving large quantities of air with large ventilators. The air in the drying area is heated to a maximum of about 70 °C. At the beginning of the drying process, moist air is mixed in with the heated air to obtain gradual drying. The temperature and humidity in the drying chambers are controlled automatically.

The required hot air is partly extracted from the tunnel kiln and partly released from the own cogeneration plant. This plant generates electricity for own use. The heat released in this process is then used in the drying process.

The drying time is about 48 hours for WF and 72 hours for DF. Huissenswaard uses 10 drying chambers; each chamber contains 53,856 bricks. During the drying process, about 30,000 litres of water is evaporated in each chamber: this is equivalent to one fully loaded tanker truck! Per week, 28 drying chambers are filled and emptied: 1.5 million bricks WF per week (enough for 250 homes).

The dried bricks are taken back to the moulding belt press using the transfer carriage, offloaded into a rack, and slid off the drying plates to the brick setting machine. The drying plates go through the plate transport to return to the ‘wet side' of the press (closed loop). 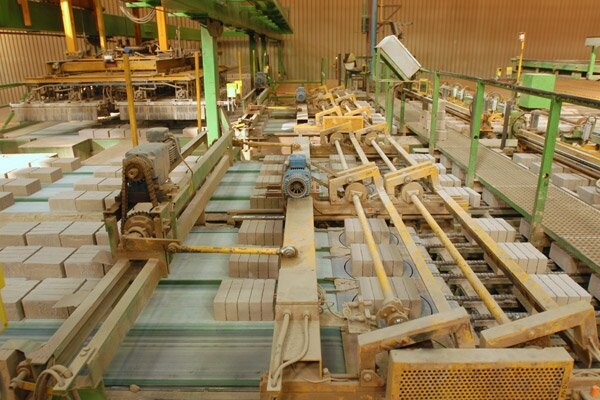 The setting machine places all bricks on their sides and conveys them to the actual setting machine. A computer counts the bricks and ensures that the machine arranges them into groups of 2, 3, 4 or 5 bricks, turns or flips these groups of bricks over, and slides them through to the final layers on the kiln car packages. No manual work is required!

Any broken bricks fall on to a lower conveyor belt, which transports them to a crushing plant. The pieces are ground and returned to the clay pretreatment machines as clay dust. During the ‘actions' on the setting machine, residual sand falls from the bricks at various locations; this residual sand is also collected and reused for the sanding of the moulds. 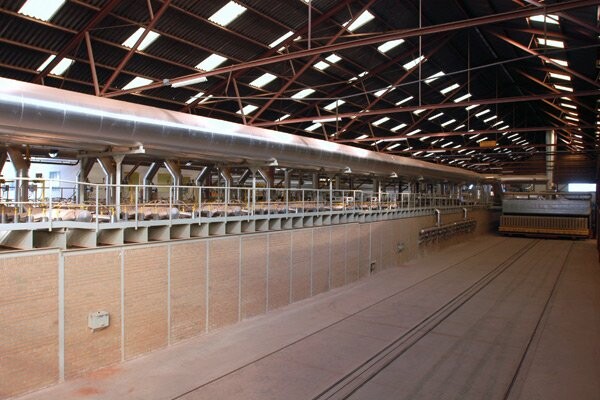 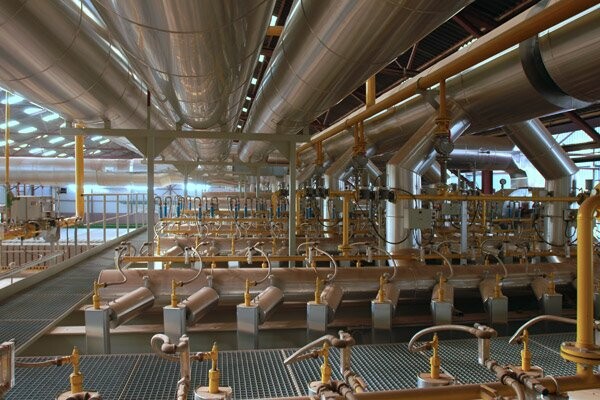 The tunnel kiln cars, each loaded with about 12,000 WF or 9,000 DF (Waaldik Format) bricks, use the sidings to enter the tunnel kiln where the ‘green product' is heated, baked and cooled again. After three days, the baked brick emerges from the kiln. Depending on the type of clay and the desired product, the maximum temperature in the kiln is between 1070 °C and 1250 °C. The kiln is powered by natural gas The kiln car transport, firing process and monitoring thereof are entirely computer-controlled.

Because the heating process in the tunnel kiln continues round-the-clock, while the production of the press and setting machine takes place during the day shifts, more kiln car loads are produced during the day shift to supply the kiln with loads during the night and the weekend. All this is clear to see on the sidings before and after the weekend: on Saturday afternoon, a long row of cars with unbaked bricks is situated in front of the kiln entrance, while the stack of baked bricks is completely depleted. On Monday morning, all the cars with unbaked bricks will have completely disappeared at the entrance of the kiln, while a long row of baked bricks will be visible at the exit. During the new week, this row will discharged and transported to the stacking area. 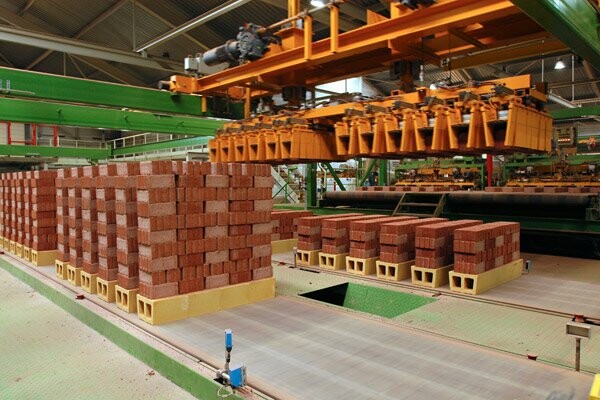 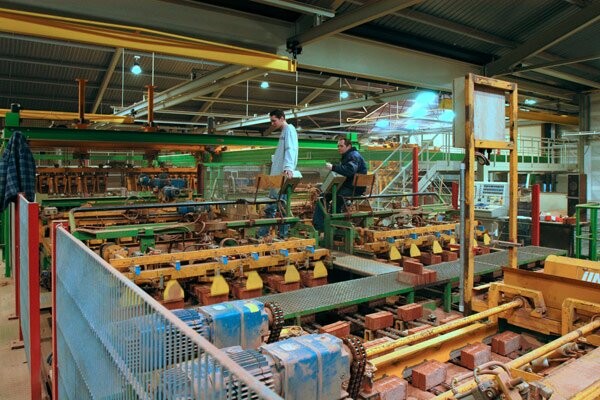 The discharge machine removes the bricks stacked by the setting machine - and now baked - from the tunnel kiln cars, takes the packages apart, mixes the bricks and builds - layer for layer - new delivery packages. The mixing of the end product guarantees a uniform colour mixing on the construction site.

The so-called Hulo packages can be divided into two or four ‘partial packages'. These partial packages are in line with the modern construction process: the bricks can be placed directly next to the bricklayer using general purpose equipment (on the scaffolding). 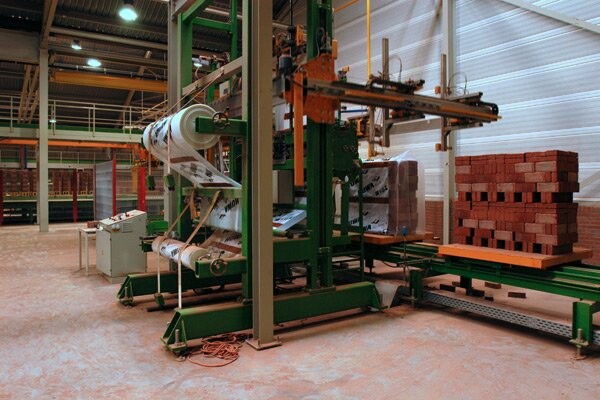 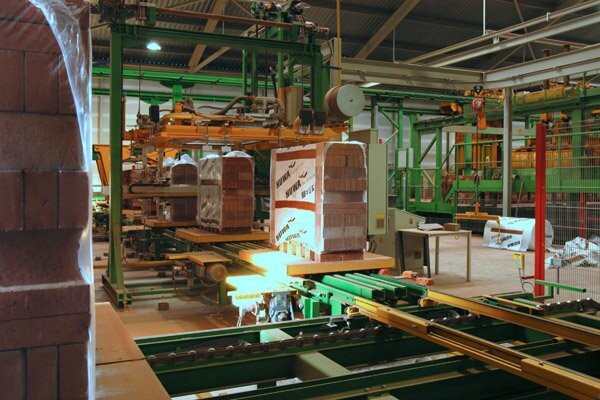 The delivery packages may be placed on pallets and wrapped in a plastic sleeve. The forklift transports the bricks to the brick stacking area, where the truck of the customer can load them.

Huissenswaard has hardly any waste products, other than usual household waste, scrap metal and used oils. These waste products are collected responsibly and processed by reliable, specialised companies.

Debris, both dried and baked, are ground by the crushing plant in our own company and reused: mixed through the clay and processed into new bricks. Waste sand is collected and reused.

The dust that is released during the production process is effectively extracted and collected by the wet filter systems. The rinsing water with the moulding belt press and the water from the wet filter systems are routed through the water purification system: a sedimentation unit separates clay, sand and water. Everything is reused!

All in all: Huissenswaard operates a modern process industry and is very socially responsible when dealing with raw materials and the environment.

Do you have a question? We are happy to assist you.

Our bricks are available through Hibin affiliated sales outlets.